How Food Lockers Combine Quality and Convenience, One Meal at a Time 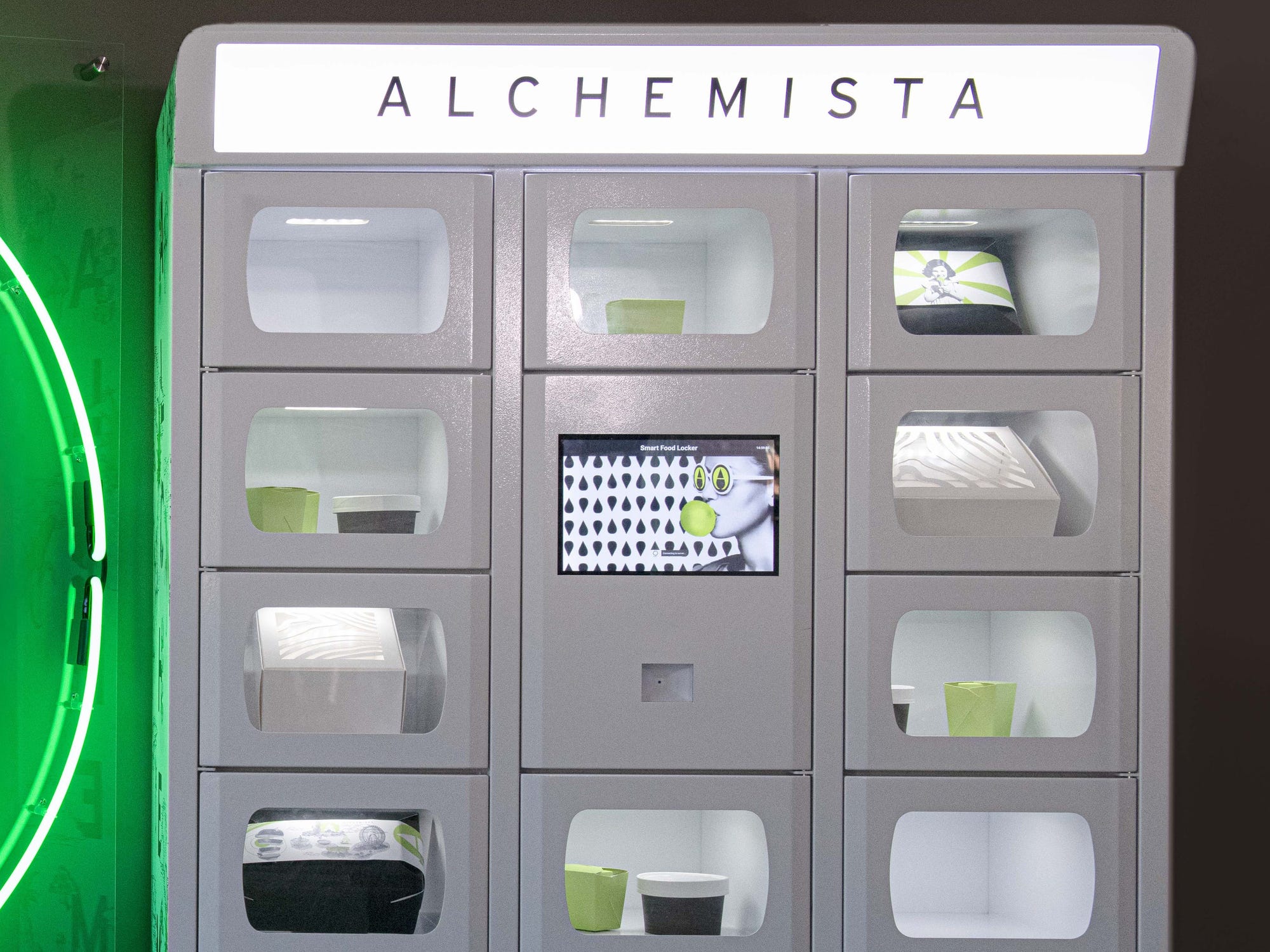 By Grace Dean from Insider

When the pandemic hit, business dried up for Boston-based corporate catering company Alchemista.

It had previously provided food for staff at companies including Splunk and TripAdvisor. As people switched to working from home, Alchemista was left with only one main client – pharma giant Moderna, which has developed a coronavirus vaccine.

But Alchemista’s CEO, Christine Marcus, used this as an opportunity to pivot her business. It’s launching a network of patent-pending food lockers, which will be deployed across offices, schools, and residential blocks and stocked with chef-made meals.

The company is focused on expanding them to residential buildings, Marcus told Insider, but also plans to roll them out to offices, college, and university campuses.

The lockers are simple to use. You scan the QR code on the locker’s tablet screen, which takes you to a payment site. After you’ve paid, the locker unlocks. This means you don’t even need an app to use them – and the whole process takes four seconds, Marcus said.

Because they’re contactless, they’re suitable for use during a pandemic, too.

The lockers are temperature-controlled, with different versions available for heated, ambient, and refrigerated meals, and they use UV light, which the company said kills 99.9% of bacteria.

As well as an on-demand service, Alchemista lets you order up to 12 hours in advance, too, via its website.

Alchemista doesn’t just provide the lockers. It provides the food, too. It has an in-house culinary team that makes the meals and delivery drivers who bring them to the lockers each day.

Before the pandemic, companies were trying to boost their corporate perks with offerings such as free meals to attract staff in cities with competitive labor markets – like Boston.

Alchemista launched in the Massachusetts city in 2012 to provide off-site, high-quality, chef-made meals to businesses who would essentially outsource it with the management of their food and beverage program. At first, Alchemista used third-party restaurants, but by 2019 it was delivering around 2,000 meals a day, and restaurants might not be able to keep up.

With this in mind, it decided to launch an in-house culinary team, which went on to provide most of its meals. It also launched operations in New York and Washington, DC where it experienced rapid growth, Marcus said.

Unfortunately, the pandemic caused the business to come “to a screeching halt,” because it exclusively provided corporate catering, she said. “COVID basically brought our business to a complete stop, except one customer,” which was vaccine-maker Moderna, she added.

The business pivoted to food lockers selling individually boxed meals. Alchemista had the technology to deploy them before the pandemic, but because corporate catering was focused on encouraging staff to be social, people weren’t interested. 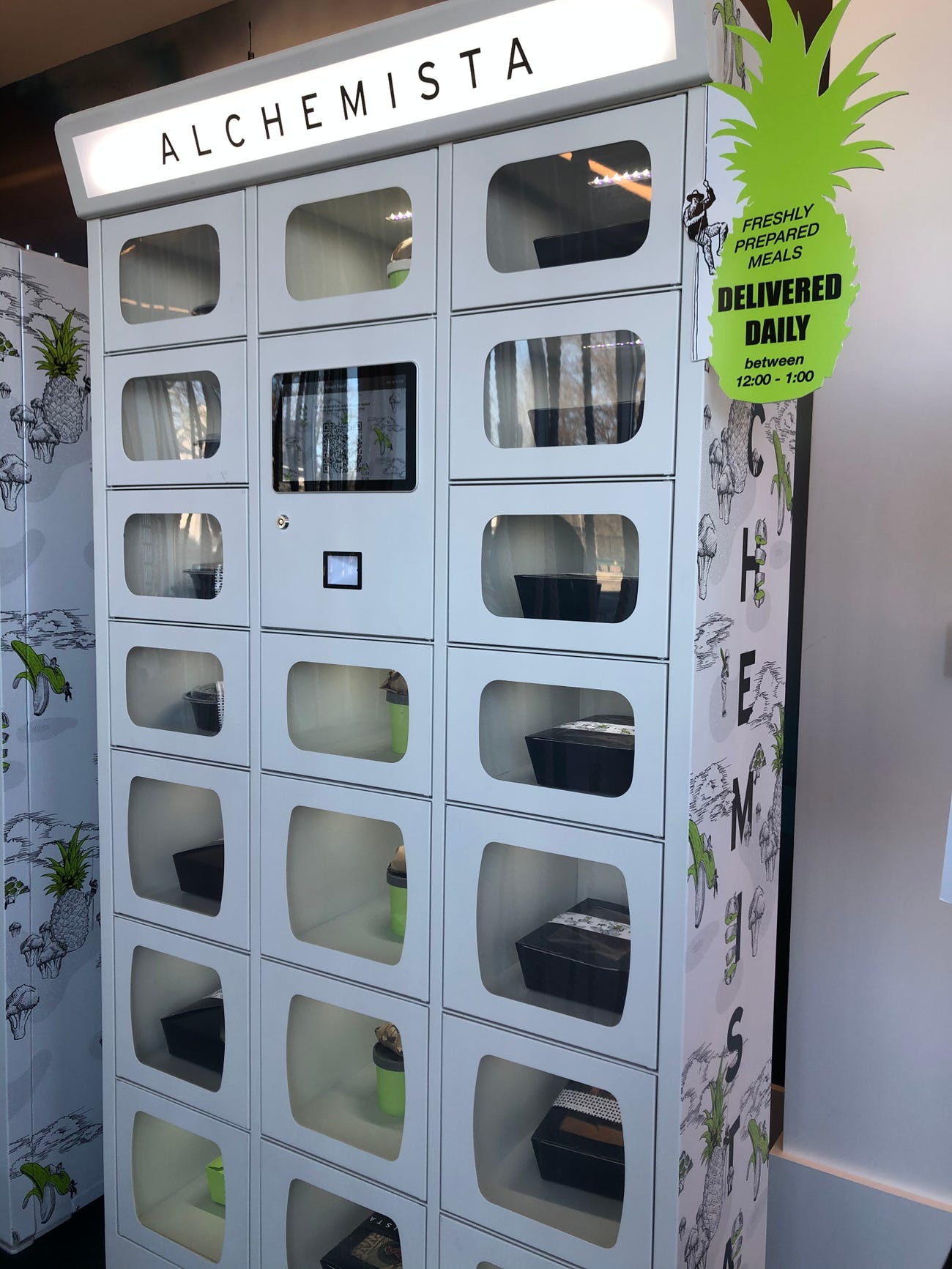 As well as chef-made meals, the lockers also sell charcuterie kits and snacks such as bagels made by a local bakery. This means the lockers can give smaller food businesses the opportunity to reach more customers.

Marcus said the trend of companies providing corporate catering would continue after the pandemic but as people adopt flexible working patterns, companies might pivot to food lockers instead. “I think it’s going to be a very different world when people go back to work,” she said.

The compact nature of food lockers – Alchemista’s larger versions have space for 19 meals and are roughly 6 foot by 2.6 foot – enables companies to reduce their real estate footprint, compared with on-site catering.

It’s not just offices that Marcus has her eyes on. In Boston, she’s rolling out lockers in the lobbies of residential blocks, where people can collect restaurant-made meals prepared by James Beard award-winning chefs, including wild mushroom risotto, paella, and braised beef.

Marcus hopes to expand even more in the future, too. She envisages the food lockers could be deployed across train stations, bus stops, college campuses, and schools.

Dynamify, a company that provides software services to contract caterers including Alchemista, told Insider demand for food lockers had “exploded” during the pandemic, especially in pharma companies and hospitals.

Food lockers are also being used in restaurants for customers who don’t want to dine in. Burger King, KFC, and Smashburger are all launching food lockers, and Automat Kitchen and the Brooklyn Dumpling Shop are attempting to revive the automat.