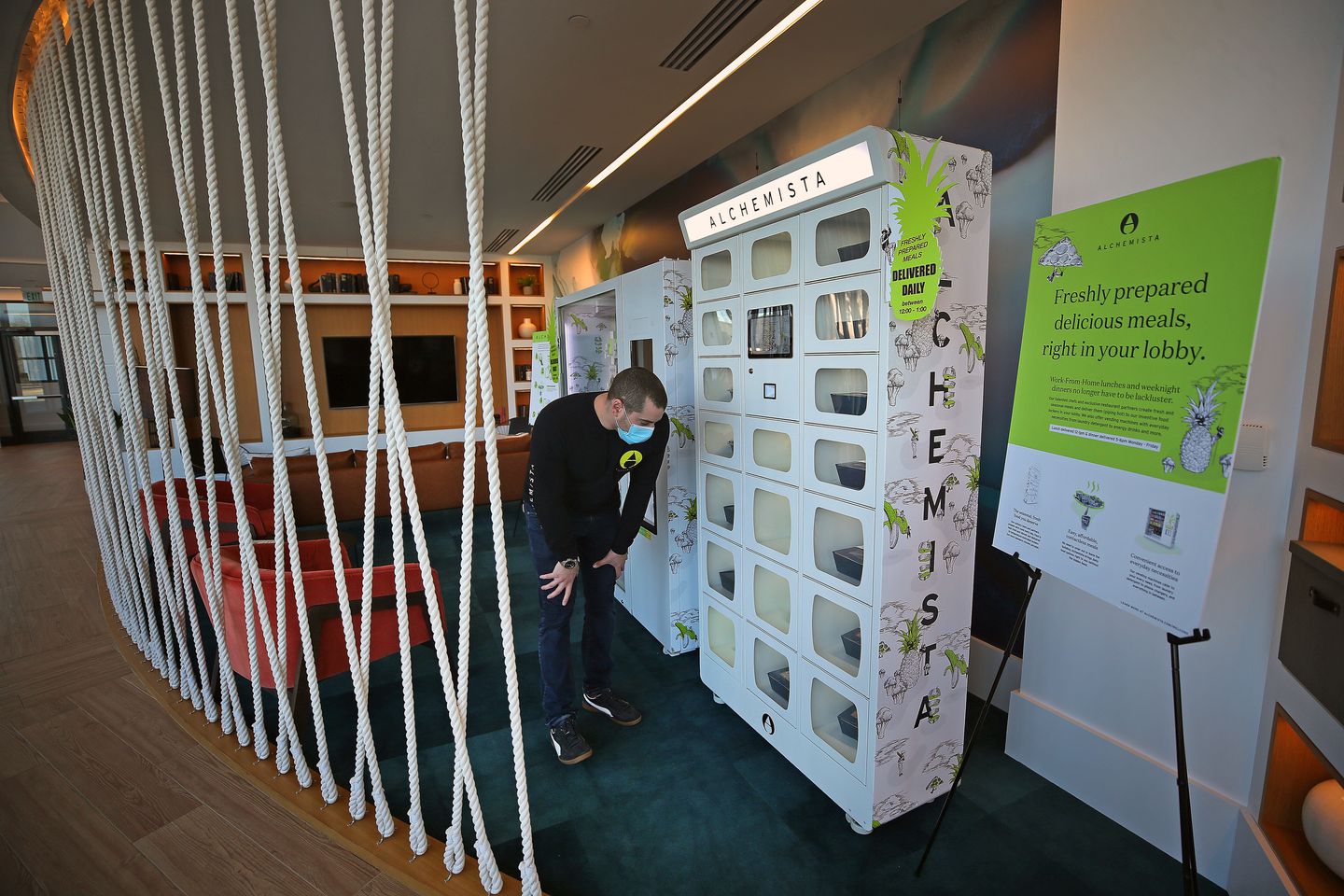 By Janelle Nanos for the Boston Globe | Photography by DAVID L. RYAN/GLOBE STAFF

When Junru Chen gets hungry and doesn’t feel like cooking, the 24-year-old no longer turns to take-out. Chen simply walks to the lobby of his apartment building and peers through the window of a temperature-controlled locker that resembles something from an Automat, the slightly futuristic precursor to fast-food restaurants from many decades ago.

But the food Chen can choose is a long way from the jiggly green Jello and gray burgers of old. After scanning a QR code with his phone, he can access the daily menu and then, with a few taps, purchase hot dishes such as wild mushroom risotto or braised short rib lasagna from Coppa, or Spanish hot chicken from Toro, both of them award-winning South End restaurants seven miles from his Brighton apartment.

Chen, who works two jobs teaching English, says the mobile marketplace, which was installed last month, has saved him hours of meal prep. “It’s so convenient,” he said, and he now eats from the vending machine two or three times a week, grabbing everything from snacks to a roast chicken.

The company behind the food lockers, Boston-based Alchemista, never intended to be in apartment buildings. For eight years, its founder, Christine Marcus, offered buffet lunches and corporate catering events for offices in Boston, New York, and Washington, D.C. But with large offices largely deserted during the pandemic, she needed to reinvent the business. And more office perks like her food service are making their way to where many people work these days: at home.

Developers of condos and apartments were engaged in a “battle of amenities” even before the pandemic started, said Ted Tye, managing partner at National Development. “That’s only intensified during COVID because, of course, people are home and they want to get every possible service imaginable at home.” So some high-end apartment building lobbies are starting to feel more like the office break room.

Looking back, Marcus admits she should have been paying closer attention to the news last March. She was caught off guard when one of her clients e-mailed her on March 13 to say the company was closing its office indefinitely and would be suspending its account while employees worked from home. “I was like, wait, huh? What?” she recalled recently. “What is that?”

Within 24 hours, nearly all of Alchemista’s hundred-plus catering clients had canceled their contracts. “I literally cried for 48 hours when that happened,” Marcus said. ”My business just evaporated.” 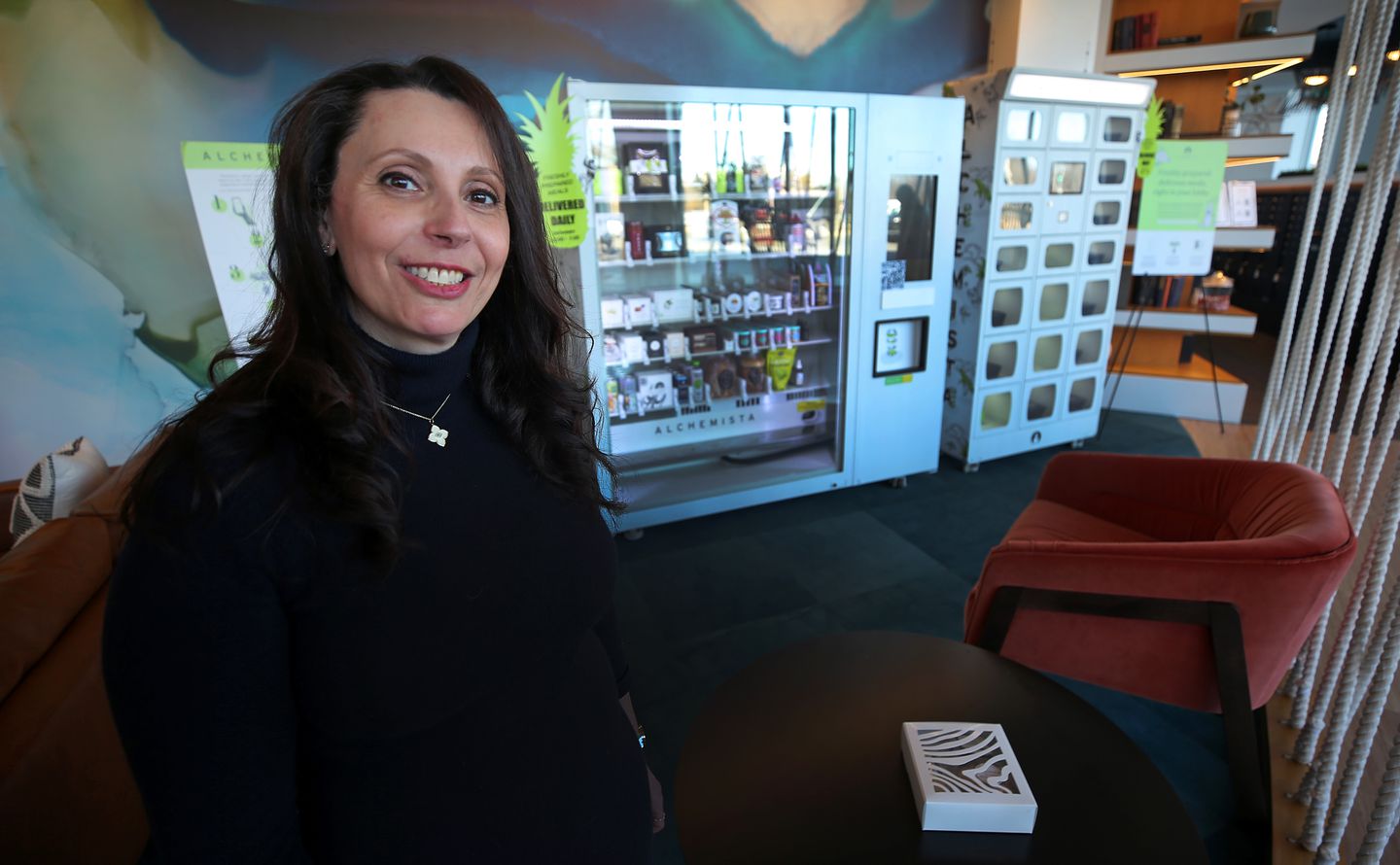 Christine Marcus, founder and chief executive of Alchemista, stands in front of her food lockers in the lobby of Radius Apartments in Brighton. Photograph by DAVID L. RYAN/GLOBE STAFF

But she did have one company hanging on: the Cambridge biotech Moderna, where scientists were working furiously to develop what would become the second COVID-19 vaccine authorized for emergency use by the Food and Drug Administration.

Moderna’s offices were still open, but it wanted to replace the buffet-style meals that Marcus had been delivering weekly with individual portions, to keep employees socially distanced. The change resulted in something of a revelation for Marcus. Before the pandemic, she had bought three climate-controlled food lockers that had been developed by a startup — a kind of a high-tech version of the Automat format. She’d been pitching the lockers to clients, but “nobody wanted them,” she said. “They were sitting there in our office.”

Marcus offered one of the lockers to Moderna, and the company immediately saw the benefits: Workers could scan a QR code to choose their meals and the doors would open automatically upon purchase. Each locker is programmed to stay hot or cold, so the food is kept at safe temperatures and donated at the end of the day if it’s not purchased. In short: No interaction between humans.

So while the biotech employees enjoyed soup and sandwiches from the lockers during long work days spent creating a vaccine, Marcus set about to refocus her business exclusively on these so-called modular marketplaces. That included buying the startup that designed the heated lockers.

On a recent day, Marcus stood in the Radius apartment building in Brighton, where Chen lives, beaming behind her mask. Two of her lockers stood side by side, next to the mailboxes in the lobby. Her employees visit the building shortly before lunch and dinner to stock one of them with meals, some of which are sourced from local restaurants. The other offers an assortment of esoteric upscale snacks, like wine gummies, Japanese barbecue sauce, and bacon jam, plus fresh loaves of bread from the Cape Cod bakery Pain D’Avignon. 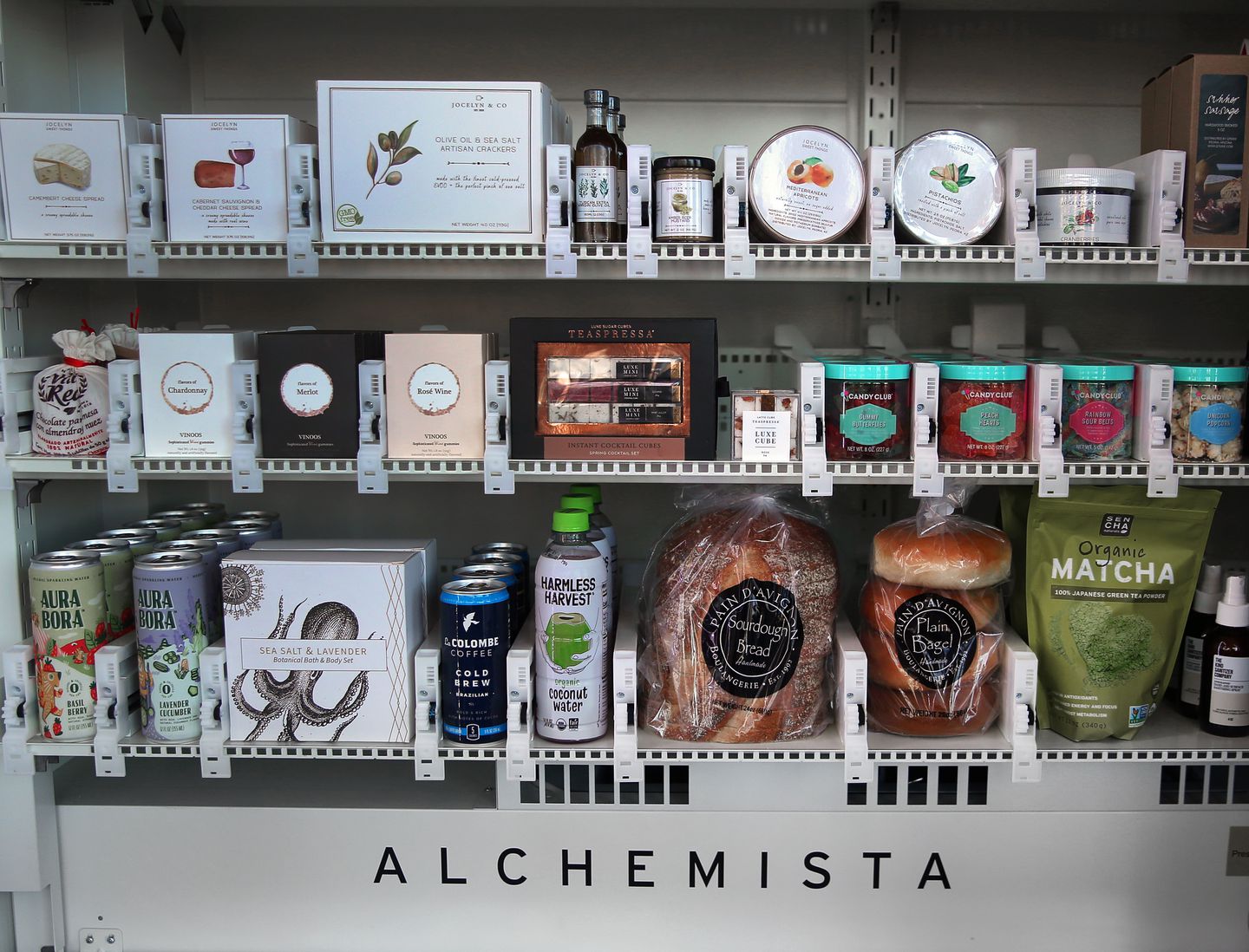 Alchemista tries to introduce innovative brands to consumers via its lockers. This locker in the Radius apartment has everything from wine gummies and matcha powder to fresh-baked bread. Photograph by DAVID L. RYAN/GLOBE STAFF

Just over a month in, Marcus has the lockers in 10 buildings around the city, and a waitlist of over 60 residential buildings in Boston looking to get lockers of their own.

The workplace shift from office buildings to homes is also leading to other changes at high-end residential buildings throughout the city, as landlords and developers look to incorporate amenities that residents became accustomed to at work.

At the 7Ink Building in the Ink Block development in the South End, the communal living plan has been modified during construction to reflect the reality that residents will be doing more work in their apartments, said Tye, of National Development, the company behind the Ink Block.

National is installing soundproof pods throughout common areas and created private workspaces that can be reserved by tenants. The company didn’t have a plan to offer food in the building before COVID-19, Tye said, but he’s now in talks with several vendors for a grab-and-go marketplace, and it’s planning to create an app for the building that would let restaurants in the Ink Block complex deliver food to cubbies in the building’s lobby when 7Ink opens at this time next year. (Similar systems are already in place at many office towers downtown.)

While Tye has been concentrating on common spaces at 7Ink, he also anticipates redesigning studio units in future buildings to create more home office space, as well as reorienting layouts to allow more natural light in work areas.

Mount Vernon Co. founder Bruce Percelay, who owns the Radius and other high-end apartment complexes in Boston, has also reimagined buildings with the home office in mind. As Mount Vernon built out the Arthaus apartments in Allston, he installed work cubbies, modifying plans for some studio units and instead creating larger units with room for dens, and subbed out sectionals in the lobby for smaller two or four-seater furniture. He even changed the fabric on the seating for leather in common areas, he said, because it’s easier to clean.

Bringing food into the buildings with Alchemista completed the puzzle, Percelay added.

“The majority of our tenants don’t tend to cook,” he said. “I’m always amazed that our property managers tell us that they’ll open up the microwave or stove when the unit turns over and the directions are still inside.” 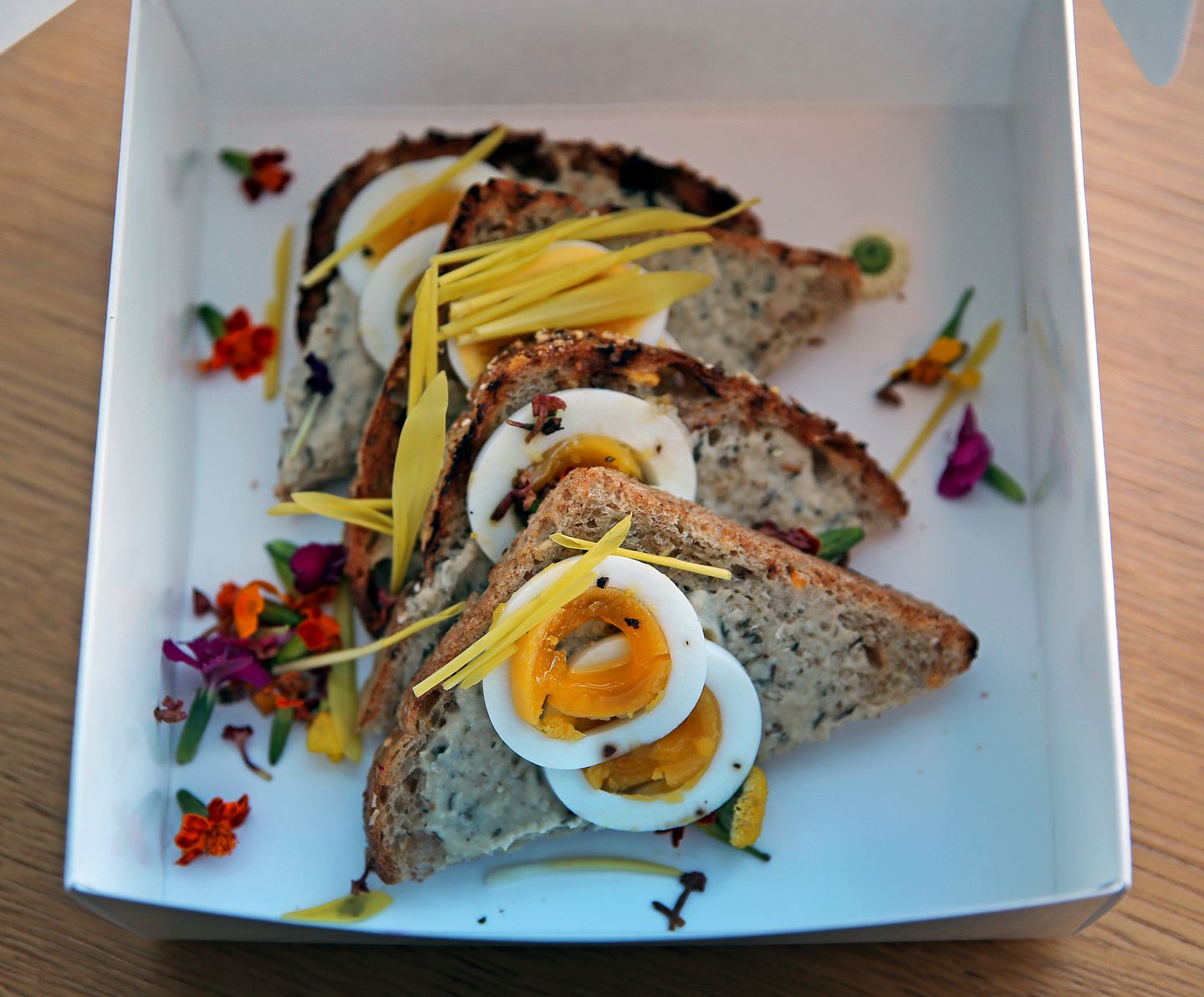 When he heard about Alchemista’s plans for its lockers, Percelay reached out to Marcus and said he wanted to help her expand the concept. He has now joined the company’s board.

Office perks were designed both to recruit and to retain people. The same rules apply to residential buildings, Percelay said, and it helps that they often target the same demographic: young well-compensated professionals. Adding food offerings in his buildings is about retaining tenants in what has become a brutally competitive rental market.

Marcus said the lockers also benefit restaurants, which have been struggling ― having them installed in buildings cuts down on third-party delivery fees. She gets the food at a discounted price and makes a “nominal” amount on each meal.

“For us there’s a guaranteed amount of food we’re going to do,” said Jamie Bissonnette, the owner of Toro and Coppa, which has been supplying food to Alchemista. “It’s a revenue stream, but it’s also a challenge and doing something new that we’ve never done before.”

Standing in the Radius building, Marcus compared the instant gratification of her lockers with the sometimes long waits for take-out. Then she looked at the lobby door, where a delivery driver had dropped off an order 10 minutes earlier.

“That food is getting cold,” she said. “Mine is still hot.”