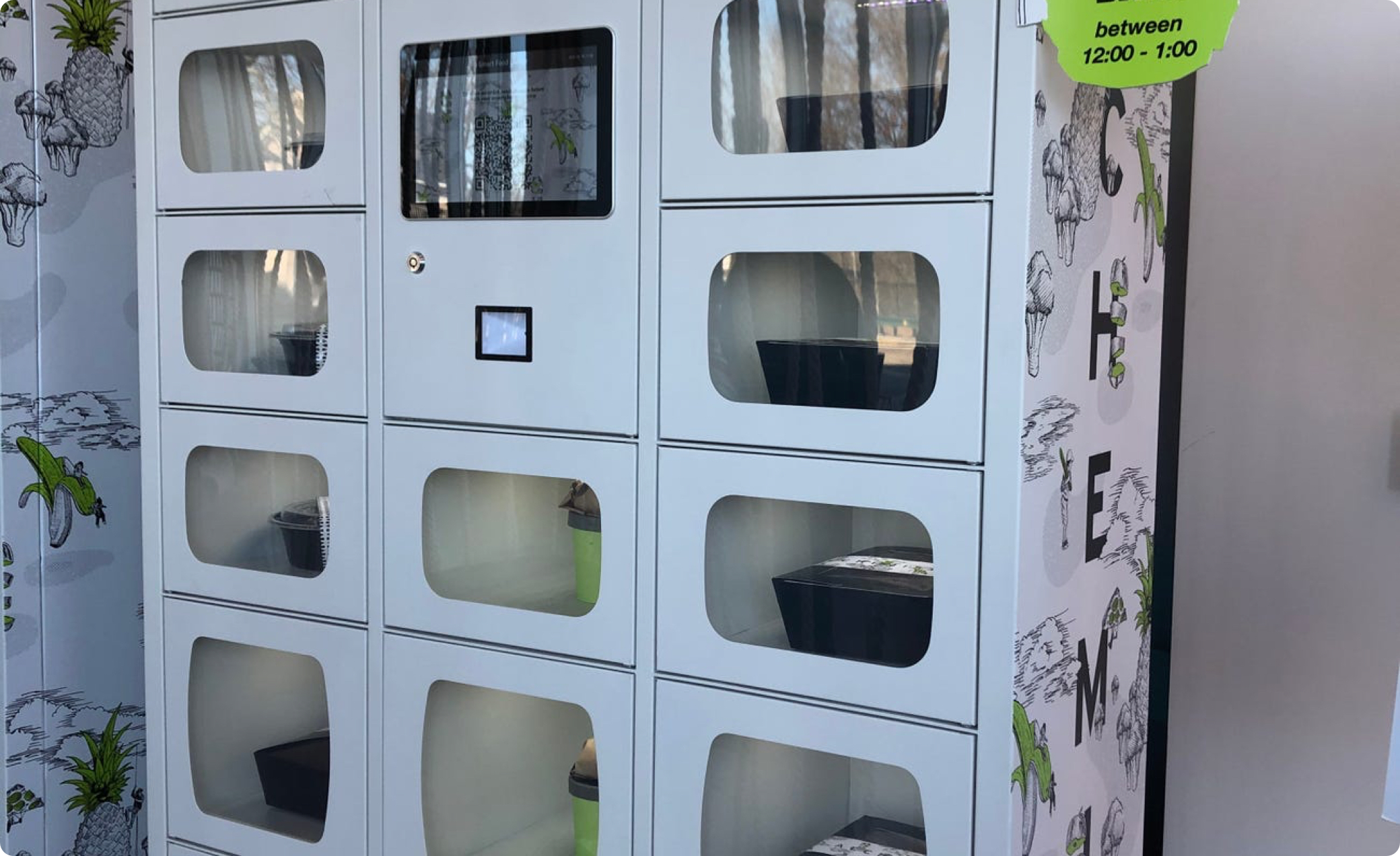 By Joanna Fantozzi for for Nation’s Restaurant News

Boston-based chefs Ken Oringer and Jamie Bissonnette of JK Food Group have partnered with foodservice solutions company Alchemista to bring their food to customers via temperature-controlled, self-sanitizing food lockers in luxury apartment buildings throughout Boston. Inspired by the ease of a vending machine, customers can place orders for meals from tapas restaurant Toro and Italian small plates restaurant Coppa via the Alchemista app and then pick it up whenever they want to from the food locker in their apartment building lobby via a unique QR code. Right now, the service is available in 10 luxury apartment buildings in the Boston area, “with a new building launching every few days,” Alchemista founder and CEO, Christine Marcus, said. Although all of the buildings are currently in Boston, they will be rolling out to buildings in the New York City and Washington, D.C. areas “hopefully soon.” Alchemista is an end-to-end amenity, with the partnering restaurant only needing to provide the food that will go in the lockers. Alchemista employees pick up between 20-40 meals at one time from Toro and Coppa (and other restaurants Alchemista might be working with in the future) and deliver them to the participating buildings for storage in the lockers, controlled at a temperature of 140 degrees for hot food (and varying cooler temperatures for temperate or cold foods). There are two one-hour shifts during peak lunch and peak dinner hours.

The lockers — known as The Orbit — look like small glass cubbies are outfitted with UV lights that kill 99.9% of bacteria — a feature that was in the works before COVID-19 hit but has become a popular selling point in the age of coronavirus.
Customers can scan the QR code with their phones to peruse the menu, pay on their mobile device, and pick up their food.

“With Jamie and Ken, we created personalized packaging for the food and we market it for them and pick up and deliver the food so all they have to do is worry about making awesome meals,” Marcus said. “Imagine you can go down to your lobby and get a meal from Toro, which may not be close to convenient to go physically. You come home from work and on your way to the elevator you scan the QR code and a door pops open with a meal that was delivered under an hour ago.”

Right now, Toro has curated a simplified version of their normal Toro menu — which changes on a weekly basis — with just a few dishes available for the Alchemista lockers. They also had to tweak their usual tapas-sized offerings to make for easy to-go full meals. They came up with the idea of creating a bento box-like smorgasbord of offerings, like one has braised short rib, patatas bravas, and their house-special corn.

“One popular dish I love is our wild mushroom risotto, but if risotto sits for a period of time it will get gummy and starchy,” Ken Oringer said. “But these lockers can hold it at ambient temperature and it stays creamy without becoming gloppy. The risotto tastes like it came right out of the kitchen. It’s cool that we were able to adapt that.”

Bissonnette said that the cost for customers is about the same as they’d pay in the restaurant, about $20-$25 per entrée, perhaps even a little bit less.

“They buy it from us and mark it up appropriately,” Bissonnette said. “We know it’s not as much of a moneymaker but it’s a cool opportunity. Hopefully the partnership will get bigger and we’ll have even more of a reach.”

The Alchemista lockers don’t just serve Toro tapas and pasta from Coppa. The company also has their own corporate catering team providing meals, snacks, and other amenities for people in the building, like dog treats. For example, on Valentine’s Day weekend this year, they filled the lockers with chocolates and other treats and have also done specialty stores like a popup bakery. Any leftovers from the day are donated to a charity called Rescuing Leftover Cuisine.

Alchemista began life as a B2B catering entity with the idea of feeding large corporations with cafeterias like Google. But when COVID-19 hit and most offices shut down (some permanently), Marcus had the idea of bringing their automated service to people’s residences instead.

“These lockers solve the problem of places being shut during the pandemic, they’re space efficient, and they allow us to work with restaurants like Toro that don’t typically do delivery,” Marcus said. “The fact that we can help protect the integrity of their brand and maintain food quality has allowed us to accelerate and get into different verticals we had not considered before.”